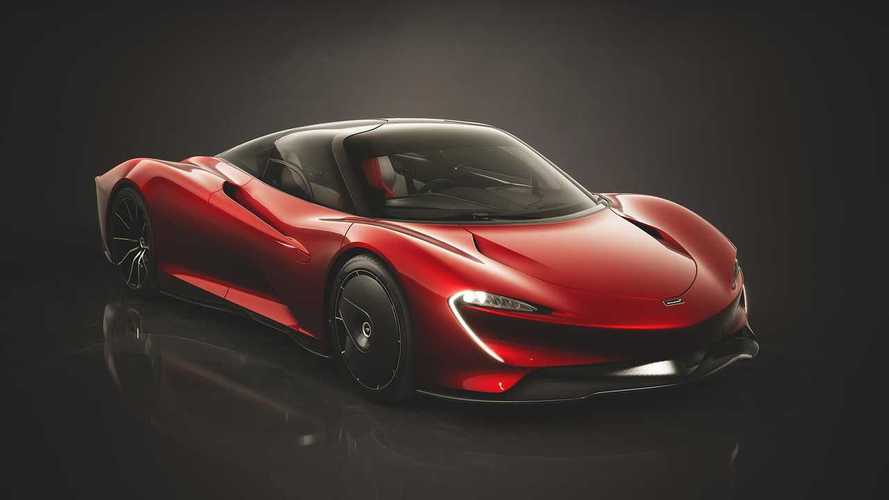 Every Speedtail owner invited by McLaren to envision their car
Three inspiring collections suggested by McLaren designers for 250mph ‘Hyper-GT’
Almost limitless range of personalisation available to owners
Colour and material concepts designed to push the boundaries with use of new materials
First Speedtail deliveries due early 2020
The 106 deposit-holders for the forthcoming McLaren Speedtail have started their journey on the road to ownership of this century’s most coveted car yet with the receipt of Colours & Materials Inspiration Story: a portfolio of design ideas to help invigorate their creative minds. The three collections have been fashioned to help this exclusive club start to think about how they would each like their individual Speedtail to look ahead of first deliveries of the 403km/h (250mph) Hyper GT in early 2020.

Every aspect of the McLaren Speedtail is designed to push established boundaries and this extends to the look and feel of each individual car. Each hand-built Speedtail will be tailored to the customer’s exact requirements, but to help make this process less demanding, McLaren’s Colour and Material design team has curated an extensive and innovative range of design concepts, arranged into three key collections:

The first, Urbane, is a collection of three themes which have been created to offer a discerning and refined feel, giving the Speedtail a sophisticated look with calm exterior hues, plus subtle and cool interior tones. One theme is Stratosphere, which sees the Speedtail finished in gloss 1K full visual carbon fibre with the contour pack, which is designed to accentuate the exterior highlights of the car’s aerodynamic bodywork. It’s set off with bespoke brushed light blue anodised aluminium brightwork, ensuring that every shimmering curve of the exterior is revealed. The luxuriant detail extends to the badging, which is crafted in platinum with TPT carbon inlay, whilst the cool-hued cabin blends the metallic light blue driver seat with light grey passenger seats. Completing the look are bespoke navy painted edge with navy contrast stitch and bespoke brushed light blue anodised aluminium brightwork.
The second collection is appropriately named Visionary and offers a purposeful and unmistakeable look from moody, yet striking shades, to opulent and surprising touches. It includes the stunning Astral theme, inspired by the UK’s wealth of nautical heritage with an interior dominated by timeless navy blue, including nubuck bespoke navy passenger seats and full aniline leather bespoke navy driver’s seat, bespoke Nebular quilt and digital print on nubuck bespoke navy leather upper trim. This is juxtaposed with a vibrant, surprising exterior finished in bespoke orange with bespoke silver pinstripe, gloss 1K visual carbon fibre and white gold 18 carat with TPT inlay badging.
The third collection, Dynamic, is exciting and modern and makes bold statements with sporty, futuristic and sumptuous themes. It’s epitomised by the Bloodline theme, distinguished by an unhindered burst of bespoke red on the exterior, with gloss black diamond cut wheels featuring a bespoke light copper edge and silver brake calipers. Inside, the driver seat is contrasted in full aniline bespoke red, whilst passengers sit on lightweight semi aniline bespoke white seats. Accentuating the athletic theme, the steering wheel clasp, paddle shifters, window and door bezel surround are highlighted in TPT carbon quartz white.
Each one of the three collections offers Speedtail customers the opportunity to personalise their car to the smallest detail with the prediction that, like the McLaren P1™ before it, every model in the 106-car production run will be unique to its owner.  All feature detail highlights such as body and interior panels finished in satin 1K or gloss 1K with interwoven gold visual carbon fibre or anodised aluminium, contouring and pinstriping to accentuate the elegant flow of the bodywork. Interior options include bespoke electro-chromatic glazing tints that remove the need for sun visors, nubuck and aniline leather, TPT carbon control surfaces and white gold 18 carat and TPT carbon badging.

The collections are just a small realisation of design opportunities presented by the Speedtail, and each owner will be allocated a Bespoke Liaison Manager to help bring their vision to life. This includes access to the services of McLaren Special Operations (MSO), helping to open up a range of colours and materials limited only by the owner’s imagination. Regardless of choice, each owner of McLaren’s Hyper-GT will take the helm at the centre of a three-seat interior, a layout that has previously only been used in the 106 McLaren F1 cars built between 1992 and 1998.

“The McLaren Speedtail is our most ambitious project to date and all were sold months before the car was even unveiled. This level of faith in McLaren products demands that we strive to even greater heights of detail and excellence. As a result of meticulous study of colours, forms and textures by our design team, finding inspiration in areas that are uncharted in automotive design, we believe that we will achieve this with the look and feel of each individual Speedtail. Whilst only 106 customer cars will be built, it is important that each one is unique, so this tailored collection is quite simply, like no other – as is the McLaren Speedtail itself.”
Jo Lewis, McLaren Automotive, Head of Colour and Material Design

With a 1050PS petrol-electric hybrid powertrain, the Speedtail will be the most powerful and fastest car created by McLaren, and the entire 106-car production run sold out before it was unveiled in October. Designed as a Hyper-GT with the highest top speed of any McLaren car, it’s distinguished by an elegant all-carbon fibre body upon which every detail has been fashioned to channel air in the most efficient manner possible.

The Speedtail ownership experience is set to be McLaren Automotive’s most exciting yet; the ordering process of every McLaren is designed to build the customer’s anticipation before delivery of the car, which is hand-built in the McLaren Production Centre, located in Woking, Surrey. This includes a tour of the facility including the McLaren Technology Centre, which houses many iconic Formula One cars as well as the famous F1 and P1TMroad cars.

The specification process coincides with the first Speedtail attribute prototype, recently christened ‘Albert’, commencing a rigorous development and testing programme. As well as being proven for high-speed travel in supreme comfort, Albert and its prototype siblings will eventually be tested at speeds of up to 403km/h (250mph), via an astonishing acceleration time of 0-300km/h (0-186mph) in 12.8 seconds.

The McLaren Speedtail was launched in October 2018 with every one of the 106-car production run sold. Inspired by the legendary McLaren F1 from which it inherits its three-seat layout, the Speedtail features a 1050PS petrol-electric hybrid engine that enables it to reach a top speed of 250mph, whilst offering the full comfort befitting a Hyper-GT.

All items in the Colours & Materials Inspiration Story are subject to final testing and sign-off.

A selection of high resolution images accompanying this release is available to download from the McLaren Automotive media site – cars.mclaren.press

Every vehicle is hand-assembled at the McLaren Production Centre (MPC) in Woking, Surrey, England.

Launched in 2010, the company is now the largest part of the McLaren Group.

The company has three defined product families: Sports Series, Super Series and Ultimate Series which are retailed through over 80 retailers in 30 markets around the world.

McLaren is a pioneer that continuously pushes the boundaries. In 1981, it introduced lightweight and strong carbon fibre chassis into Formula 1 with the McLaren MP4/1. Then in 1993 it designed and built the McLaren F1 road car - the company has not built a car without a carbon fibre chassis since. As part of the Ultimate Series, McLaren was the first to deliver a hybrid hypercar, the McLaren P1™.

Announced at Goodwood Festival of Speed in 2018, the company’s Track25 business plan will see it invest £1.2billion in research and development to deliver 18 new cars or derivatives by the end of 2025.

To support the development, engineering and manufacture of its range of innovative sportscars and supercars, McLaren Automotive partners with world leading companies to provide specialist expertise and technology. These include AkzoNobel, Kenwood, Pirelli and Richard Mille.